Home » About us » History » A New Church 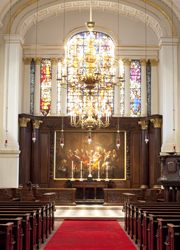 The Interior seen from the West Gallery

In 1711 Parliament passed an Act for the building of Fifty New Churches in the Cities of London and Westminster or the Suburbs thereof. For over half a century London, to provide housing for a fast growing population, had been sprawling out into the surrounding countryside, engulfing villages and obliterating the farmlands, which even then came close to the City Walls. The spiritual needs of the dwellers in the new districts were not overlooked, and the Act of 1711 was designed to satisfy the. Money was to be raised, as it had been for St. Paul's Cathedral and the City churches, by a tax on coals.

As the City grew, the merchants and tradesmen tended to live and work as near to the centre as possible. The nobility and gentry moved westwards. Hanover Square, so named after the new Royal House, was the first of the West End squares to be built, between 1716 and 1720, and the new inhabitants successfully petioned the Commissioners for Building New Churches for a convenient place of worship. One of them, General the Hon. William Steuart, Queen Anne's Commander-in-Chief in Ireland, offered a small plot at the nearby junction of Maddox and George Streets. This was accepted and approved by the commissioners on the 11th March 1720. Two architects, James Giggs (the designer of St. Martin-in-the Fields) and John James were invited to submit plans for the new church. The latter's were chosen.

James was a competent architect, overshadowed by his contemporaries, Gibbs and Nicholas Hawksmoor, with whom he worked on friendly terms. The son of a parson, he was born about 1672, and began his career as an apprentice carpenter, working for Sir Christopher Wren. At the age of thirty he became assistant Clerk of the Works at the Royal Hospital Greenwich. In 1714 he became Assistant Surveyor to St. Paul's, succeeding to the Surveyorship in 1723. He built some excellent houses and a few churches, most of which have been destroyed. St George's was his most notable achievement and shews what a sound architect can do with a restricted site and a limited financial budget. He was ordered to cut down his design so that it should cost no more than £10,000.

Digging for foundations started in February 1721, and on the following June 20th the first stone was laid by General Steuart, who, after striking it with a mallet, poured a libation of wine, with the words, "The Lord God of Heaven preserve the Church of St George".

Building materials were stacked in Hanover Square, and there were constant complaints from the inhabitants about the prolonged inconvenience caused by what seemed to them unnecessary delays. As a result the mason in charge, Joshuah Fletcher, was sacked, in January, 1725, his place being taken by Edward Strong Junior and Christopher Cass. They speeded up the work, and on March 20th 1725, John James was able to certify the completion of the building. Three days later it was consecrated by Edmund Gibson, Bishop of London.