Home » About us »The Building » The Organ 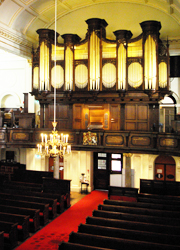 The new organ for St George’s by Richards, Fowkes & Co of Ooltewah, Tennessee, USA is, as far as we know, the first American built organ in London and one of very few and the first for a long time in the UK. Indeed it is one of only a handful in Europe as a whole. With 46 speaking stops and 2,968 pipes (arranged over three-manuals and pedals) the comprehensive specification allows it to play a wide range of music. The organ is housed in the restored west gallery case used for the first organ of 1725, which was subsequently expanded in 1896.

When looking for a company to build a new organ we were mindful of many factors: the Baroque architecture of the church; that Handel, who with JS Bach was one of the two leading composers of the late Baroque, worshipped regularly at St George’s from 1725 until his death in 1759; that the acoustics of the church suit Baroque music very well; and that much Baroque music is still performed here, not least during the annual London Handel Festival. So an organ speaking with a Baroque accent made a good starting point, yet this organ would also need to accompany the church’s professional choir and other groups and be able to play a wide range of solo repertoire convincingly.

These criteria led us to Richards, Fowkes & Co whose work is rooted in the sound world and construction methods of eighteenth-century Germany and Holland yet whose open- minded approach allows them confidently to build on this starting point and to create organs with very much their own character. To put it in their own words:

This instrument is a departure for us on several accounts: our first organ abroad; our first organ to fit in an existing case; the first to emphasize the role of a Choir division in place of a Positive; and consequently, our first organ with 2 independent swell boxes. This organ also builds on our recent trends to add more variety of colour and volume to the stoplist. The result of this new direction is an organ that continues our North European inspirations for colour, clarity, and gravitas, while subtly shifting the emphasis towards the needs of the Anglican choir.

Our Organ in history

The western gallery is dominated by the organ-case. Of this the three central towers with the "flats" between are the original case installed by Gerald Smith, nephew of the builder of the St. Pauls Cathedral organ, Bernard Smith. It was completed in 1725, contained 1514 pipes, and had three manuals, Great, Choir and Swell. The cost was £500. In 1761 the Parish Vestry contracted with John Snetzler for a new organ to be fitted into the old case, for which he was to have £300 and the old pipes. A further rebuilding was undertaken by J.C. Bishop in the early 19th century.

The instrument had no pedal board until its renovation and enlargement by William Hill in 1864 at a cost of £440. In 1894 the Hope-Jones Electric Organ Company completely rebuilt and enlarged the organ. Sir Arthur Blomfield was responsible for the additions to the case. A fire in 1896 severely damaged the instrument and it had to be almost completely rebuilt. The present organ was built inside the old case by Harrison and Harrison of Durham in 1972 with the addition of the small "chair" organ above the Royal Arms and a console in the north gallery. The Hope-Jones console is still to be seen on the south side of the choir.